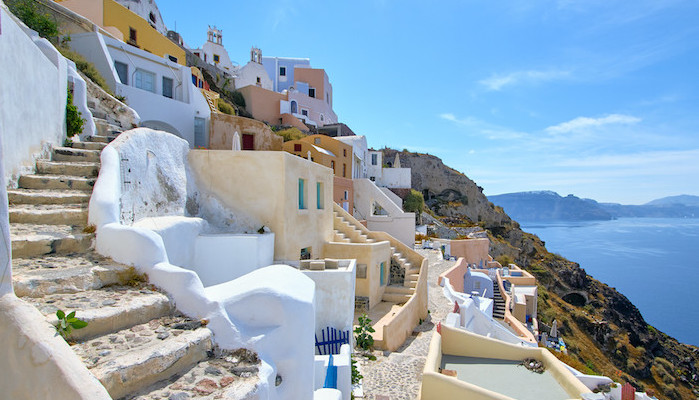 Santorini is one of the most photographed islands of the Aegean and full of unique images that make the lens bow to their unsurpassed charm. Explore Santorini with Santorini Private Tour. There is nothing more impressive than the steep slopes of the Caldera that lovingly embrace the famous volcano.

The volcanic land gives the wines special characteristics and some of the best in Greece you will find only in Santorini. Many Wineries on the island give you the opportunity to visit and tour the winery, to learn all the stages of the wine production process and the traditional cultivation of the vineyard, to taste their fine wines and to learn the secrets of tasting, in combination with gastronomic suggestions from the Cyclades, learning about the varieties of the Santorini vineyard and enjoying the tranquility of the landscape and the colors of the Thera land. In fact, the oldest vineyard in Europe is located in Santorini and is 300 years old, this alone tempts us to visit one of these wineries and do a special tasting and enjoyment lesson.

The volcano of Santorini is an attraction for tourists from all over the world as it is the most popular attraction of the island, as it is one of the largest underwater active volcanoes in the world. Probably the only volcano whose caldera reaches the sea. Its largest eruption occurred during the Minoan Bronze Age 3,600 years ago. The entire center of the then circular island sank in the sea during the terrible volcanic eruption.

The eruption caused a tidal wave that literally wiped out the advanced civilization of Minoan Crete, 70 miles south of Santorini. The result of the volcanic eruptions that occurred over the centuries are the islands of Palea and Nea Kameni, in which there are a total of 8 volcanic craters, seven in Palea and one in Nea Kameni, which is the newest island in the Mediterranean. There is also an underwater crater called Columbus located in the northwest of the island near Oia. Although the volcano is currently at rest, you will notice that the craters emit gas and water vapor.

To go on an excursion to the islands created by the activity of the volcano, you can take boats that start from the ports of Gialos and Athinios. Larger than these is Thirasia, the only one inhabited. Between Thirasia and Thira are Palia and Nea Kameni. In Palia Kameni you can swim in warm sea waters (35 o Celsius) and in Nea Kameni (after a half hour climb) you will see the crater of the volcano from where sulfur and hot air come out.

The island has plenty of beaches, ranging from wild shores full of hot black sand, to well-organized beaches, where you can enjoy your cold drink directly on your sun lounger. Vlychada is suitable for tanning-express, Monolithos for heads of families, Perivolos for the laity, Kamari and Perissa for the anxious, Akrotiri for the foreigners and Columbus for the fans of nudism.

The cosmopolitan Perissa is a beach that has a length of 7 km paved with dark sand, crystal clear deep waters, umbrellas and sunbeds, restaurants, beach bars and water sports. You will find it on the southeast coast of Santorini, 15 km from Fira and you will arrive by your own vehicle or by regular bus. Perivolos is also a favorite choice, which is essentially an extension of Perissa. Soft black sand mixed with pebbles, good organization with umbrellas, sunbeds, beautiful restaurants and beach bars.

The Red Beach is also of unique beauty, close to the archeological site of Akrotiri. Vertical rocks made of dark red solidified lava, black and red sand and dark, blue waters. You will find umbrellas and sunbeds while you can reach by boat from Akrotiri. So you have the option to choose the beach you like depending on your mood or its color. White sand, black or red, the island has the solution for every taste.

You can also dive in the underwater caves of the volcano. Only a diving enthusiast can understand the uniqueness of the experience of becoming part of this wonderful aquatic world. In Santorini you will feel this many times over, since there is a unique peculiarity of the seabed: the volcanic rocks and the awe from the bottom of the caldera.

This island that appears in every travel magazine and attracts travelers from all over the world could not but be an artistic inspiration not only for photographers but also for directors who are looking for a little paradise to frame their films. Undoubtedly, Santorini is one of the most beautiful and most famous islands in Greece and it is no coincidence that the Caldera of Santorini has been characterized, like the whole island, as of special natural beauty.